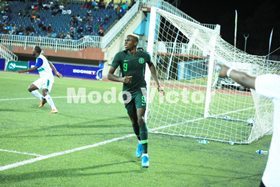 Gernot Rohr has admitted that it would benefit the Super Eagles if Victor Osimhen moves to an English Premier League club participating in next season's UEFA Champions League.
All signs point towards the Super Eagles number nine departing Lille next season so long as his asking price is met, with several English, Spanish and Italian clubs considering signing the Ultimate Strikers product.
Osimhen has been linked with Chelsea, Liverpool, Tottenham Hotspur, Arsenal and Manchester United in England, while Italian Serie A club Napoli are keen on signing him as a replacement for Poland star Arkadiusz Milik.
"Victor Osimhen I think will have a very big opportunity to go from Lille, perhaps in Premier League or in Italy, to a very, very big club, this is also a success for him but also for the Super Eagles to have players in Champions League clubs," Rohr told Channels Television.

"If we have players playing in a very high level in the clubs, our level in the Super Eagles is growing also."
Rohr is in support of Osimhen joining one of the big European clubs interested in his services provided the striker is guaranteed game time.
"If he stays for another season it would be good for him because he's playing.
"If he is going to a very big club - you have seen the clubs ready to buy him now - he is not so sure to play because there's big competition for the starting places in the team.
"If he stays in Lille it would be good because sportively he will progress, we are sure about it, but he's also able now because he's progressing so much to play in a very big club, it depends.
"If he has competition it would be better to play in a better club than Lille, if he's not playing it's not so good for him because a young player like him has to play to progress," the Franco-German coach added.
The 21-year-old Osimhen thrived in his debut season in France, scoring 18 goals in all competitions and had six assists to his name.
Igho Kingsley
Copyright ANS