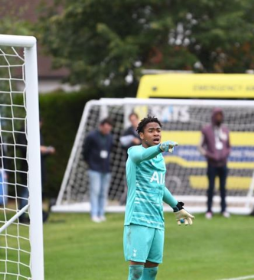 Tottenham Hotspur rising star Joshua Oluwayemi has identified Arsenal super kid Bukayo Saka as the toughest opponent he has faced in his career.
The former England U16 goalkeeper came up against Saka in the fourth round of last season's FA Youth Cup, with the Gunners running out 5-2 winners after extra-time and the Nigerian winger accounting for two of the goals scored by the home team.
Oluwayemi admitted that Tottenham Hotspur defenders were told to keep a close eye on Saka but the Arsenal number 11 was literally unplayable.
On the player that has given him the most headache, Oluwayemi told Team Nigeria UK in an Instagram conversation: "I don't want to give him the satisfaction, but you know Bukayo Saka, he is too good. I can't forget him.
"We told our defenders to watch out for him, we tried everything but he was exceptional."
Oluwayemi picked Spurs' 4-0 rout of Liverpool in a Premier League 2 game held in December as the best match of his career so far.
"I'll go with this season, this season I have had a lot of good games but my best game probably was Liverpool because we won as well.
"I have had good games and we lost, as a keeper you can have a good game when your team has lost, you have got a lot to do," he added.
Ifeanyi Emmanuel
Photo Credit : instagram.com/jchibzz
Copyright ANS