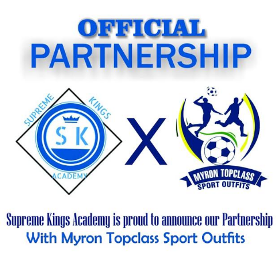 
The deal to represent Surpreme Kings Academy of Umuahia was sealed on June 1, 2020 and will run through May 31, 2022.
Among other duties, Myron Topclass Sport Outfits which has Nigeria Football Federation registered intermediary Mr. Eddie Iseri Ogbemudia as one of its top agents is expected to secure and represent participants from the academy both locally and internationally.

Eddie Ogbemudia is also expected to facilitate the club's participation in local and international tournaments within the agreed period.


"We have followed activities of Myron Topclass Sport Outfits through Mr. Eddie, based on their track records and antecedents and they have proved to be the best option out of so many, as we factored accessibility, knowledge and experience.
"I have been impressed with the doggedness and commitment of Mr. Eddie Ogbemudia in working with grassroots clubs and top Nigerian footballers. It was an easy choice at the end".
Myron Topclass Sports Outfits has the image rights deal with Super Eagles' Spanish-based midfielder Oghenekaro Etebo.