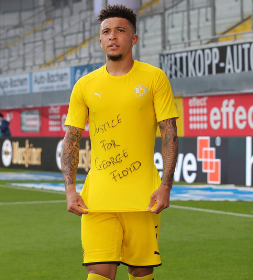 Nigeria coach Gernot Rohr has praised Borussia Dortmund winger Jadon Sancho and Borussia Mönchengladbach striker Marcus Thuram for honoring the memory of George Floyd in the last round of matches in the German Bundesliga.
George Floyd, an African-American man was killed by a white Minneapolis police officer on May 25, 2020, and his death has sparked protests across the United States.
Shortly after doubling the advantage against Jamilu Collins' Paderborn, England star Sancho paid tribute to Floyd when he lifted his jersey to show a T-shirt with a handwritten message 'Justice for George Floyd'.
Borussia Mönchengladbach's Thuram took a knee after opening the scoring against Anthony Ujah's Cologne; Schalke 04's Weston Mckennie and Dortmund'sAchraf Hakimi have also paid tribute to Floyd.
"It's about George Floyd, I am very proud to see people show solidarity with George Floyd and asking for justice," Rohr said to Channels Television.
"Like you know I watch German Bundesliga, I am German. I am very proud to see more players, not only Jadon Sancho but also Marcus Thuram from Borussia Mönchengladbach, also the coach from Borussia Mönchengladbach, Marco Rose.

"A lot of players and coaches in Germany show their solidarity with George Floyd and myself also I show it."
Ifeanyi Emmanuel
Photo Credit : bvb.de
Copyright ANS