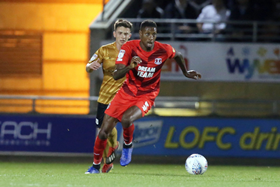 Through a statement on their official website, EFL League Two club Leyton Orient have announced their retained and released list following the cancellation of the 2019-2020 season.
Nigerian striker James Alabi has been released by the O's and will be available as a free agent on June 30 when he officially comes off contract.
The 25-year-old made 40 appearances for the club between 2018 and 2020, scoring three goals.
He joined Orient after stops at Stoke City, Celtic, Ipswich Town, Chester and Tranmere Rovers, and enjoyed loan spells at Scunthorpe United. Mansfield Town, Forest Green Rovers and Accrington Stanley while at the Potters.
Meanwhile, central defenders Marvel Ekpiteta and Shadrach Ogie have been retained by Leyton Orient subject to agreeing new deals with the club.  Contract negotiations are ongoing.
Ogie, 18, has played non-binding games for Republic of Ireland U18s while Ekpiteta and Alabi have played for England C team in the past.
Igho Kingsley
Photo Credit : leytonorient.com
Copyright ANS