...the complete Nigerian football portal
Subscribe
'He Was A Good Footballer But Came Across As Arrogant' - Ex-Liverpool Defender Otsemobor On Diouf
Published: June 06, 2020 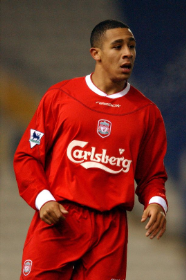 Former Liverpool defender of Nigerian descent, Jon Otsemobor has admitted that some players despised El-Hadji Diouf during his time at Anfield because the Senegal hero had an arrogant nature.
The winger cum striker was one of the stars of the 2002 World Cup, impressing as Senegal reached the quarterfinals after upsetting France in the group stage, and also played a key role as the Teranga Lions reached the final of the Africa Cup of Nations that same year.
To this day, Diouf is seen as a demi-god by his countrymen, with two African Footballer of the Year awards won.
Signed for ten million pounds from Lens in 2002, Diouf failed to live up to expectations at Liverpool, managing only six goals in 80 matches before a permanent switch to Bolton Wanderers in 2005.
Though Otsemobor admitted that Diouf was a good footballer, he was an unpopular figure in the dressing room.
Speaking to Liverpool Echo, Otsemobor said : "Other than that though, I know a few other lads in the dressing room didn't like him, but I never had a problem with him.
"He did, at times, come across arrogant but don't get me wrong, he was a good footballer.

"I think from where he was in Senegal, and the upbringing he come through, he was looked upon as a God over there. He was doing well, outstanding at the World Cup before he came to Liverpool, and Liverpool paid £10m for him."

He continued : "I think he still had that persona about him, that God-like persona. When he came into the dressing room it wasn't long before he found out there were a lot of other lads there either as good as him or better than him.

"Maybe he didn't get the respect off some of them that he would have thought but I never seen him have bust-ups or arguments with anyone. I don't recall any, anyway."
Liverpool-born Otsemobor rose through the ranks before making his professional debut for the Reds in a 3-1 win against Southampton in the League Cup in November 2002.
Igho Kingsley
Photo Credit : mirror.co.uk
Copyright ANS