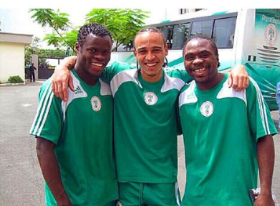 Peter Utaka, the younger brother of John Utaka, has revealed that he chose to play for the Super Eagles over Belgium.
The former Royal Antwerp and Westerlo striker was eligible to represent the European powerhouse because he lived in the country for several years and was in possession of a Belgian passport.
Peter Utaka starred on his debut for Nigeria, scoring and providing an assist in a 5-2 rout of Democratic Republic of Congo in March 2010 and was named in the country's provisional squad for the 2010 World Cup.
"At that time I had to choose between Belgium and Nigeria, I have got a Belgian passport, I was raised in Belgium, I was young when I moved there, I went to school there," Utaka told Team Nigeria UK in an Instagram conversation monitored by allnigeriasoccer.com.

" When we were younger, me and John, our childhood dream was to play together, it doesn't matter if it's in the national team or in the clubside. So when that opportunity came up, this is it.

"Maybe Belgium would have given me a longer career but I had a dream with John for us to play together, so it was an easy one for me to chose and besides Nigeria is my number one country. I can't leave Nigeria for any country."
Peter Utaka said it was an honour to play alongside John Utaka and Nwanwko Kanu in the Super Eagles and does not regret his decision to commit his international future to the three-time African champions.
"I got to play with my brother and Nwankwo Kanu, these are the people that you watch on television, I get to pass the ball to them, do some few tricks with them.
"It was an amazing journey for me, I enjoyed every part of it," he concluded.
The 36-year-old Utaka is the highest scoring Nigerian player in the history of the Danish Super Liga, netting 52 goals in 108 matches for Odense BK.
Ifeanyi Emmanuel
Photo Credit : instagram.com/peterutaka
Copyright ANS