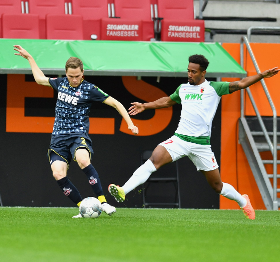 How players of Nigerian descent fared in the German Bundesliga on Sunday, June 7.
Super Eagles striker Anthony Ujah bagged his first assist of the season as Union Berlin were held to a 1-1 draw by Schalke 04 at the Stadion An der Alten Försterei (Berlin).
Eleven minutes into the contest, Ujah kept control of a loose ball and passed to Robert Andrich who fired past goalkeeper Nübel, but they were denied three points after Jonjoe Kenny equalised for the Royal Blues.
While Ujah was in action for 78 minutes, teammate Suleimen Abdullahi was a non-playing substitute for the third time this season.
Super Eagles hopeful Noah Sarenren-Bazee put in an impressive 90-minute shift as Augsburg held out for a 1-1 draw against Cologne at WWK Arena, his second consecutive start in as many games.
Bazee was a threat down the right flank and won a penalty for his side in the 27th minute but Niederlechner failed to convert.
Per whoscored.com, the Augsburg number 17 completed a game-high four dribbles, was the most fouled player on the pitch (5) and won the most aerial duels (6).
The two other German-born Nigerian players that started the game, Augsburg's Felix Uduokhai and Cologne's Kingsley Ehizibue, logged ninety minutes.
Ehizibue returned to the starting lineup after he was an unused substitute in the previous match vs RB Leipzig.
Anthony Modeste scored for the visitors five minutes from time, only for Philipp Max to restore parity with two minutes left.
Ifeanyi Emmanuel
Photo Credit : fcaugsburg.com
Copyright ANS