...the complete Nigerian football portal
Subscribe
'They Might Have Broken My Contract If I Tackled Messi' - Ekpolo On Training With Barca First Team
Published: June 09, 2020 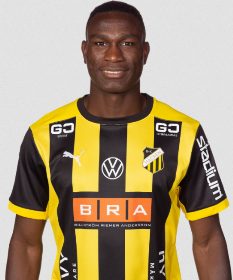 Former Nigeria U23 international Godswill Ekpolo has claimed that training with Barcelona first team stars such as Lionel Messi, Andrés Iniesta, Sergio Busquets and Gerard Piqué was a bit boring because he was not allowed to tackle the players.
The Benin City-born right-back, who started his career as a midfielder, was on the books of Barcelona for eleven years before he was released in 2016.
A key member of the Barcelona side that won the UEFA Youth League in 2014, he was often invited to train with the first team but departed the Camp Nou side without playing an official game for the club.
When asked to share his experience of training with Messi and Co., Ekpolo told Göteborgs-Posten (subscription required) : "For me, from my perspective: A bit boring. Yes, you could not be tackled! You had to leave. They didn't give us much freedom.

"If I had hurt someone they might have broken my contract. Obviously it was a good experience to see Messi, Iniesta ... but I need freedom to play!".
After leaving Barcelona, Ekpolo had stops at Fleetwood Town and Mérida AD, before joining Swedish club BK Hacken, for whom he has made 49 appearances and scored two goals.
Ifeanyi Emmanuel
Photo Credit : bkhacken.se
Copyright ANS