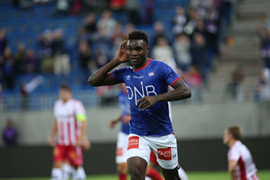 Young Nigerian striker Peter Godly Michael was the match-winner for Valerenga as they registered a hard-fought 1-0 victory against Bodo/Glimt in a pre-season friendly on Tuesday, June 9, allnigeriasoccer.com reports.
Having started the game on the bench, the 22-year-old was among the four substitutes introduced by the Valerenga coach at half-time.
Thirteen minutes into the second half, Michael scored what proved to be the only goal of the match as he headed home following a brilliant corner from Finne.
The former Rivers United man was also on target in Valerenga's penultimate friendly, a 2-1 loss to Jerv, starting and finishing a move with a brilliant left-footed strike.
In search of a regular game time, Michael spent a portion of last season on loan at Skeid Oslo, scoring one goal in seven matches.
Valerenga begin the new season with a trip to the Sarpsborg Stadion, where they face Sarpsborg 08 on Tuesday, June 16.
Ifeanyi Emmanuel
Photo Credit : vif-fotball.no
Copyright ANS