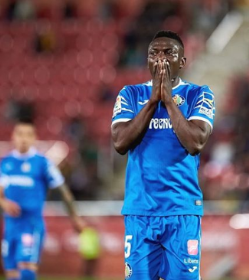 Super Eagles midfielder Oghenekaro Etebo was in action for 90 minutes and was yellow carded at the  Estadio Nuevo Los Cármenes in a matchday 28 fixture between his Spanish side Getafe and home side Granada who came from a goal down to claim a 2-1 win.
The match was the first La Liga match on Friday evening before Valencia hosted Levante but second in the restart.
Granada did not parade fellow Nigerian international Ramon Azeez who was an unused substitute.
Carlos Fernandez scored the hosts' goals in the 70th and 79th minutes but Timor had put Getafe ahead 20 minutes into the game.

Etebo went unpunished for an elbow on Granada's Carlos Fernandez five minutes on the clock.

The Nigerian playing in his eighth game in 2020 created a goal scoring opportunity in the 49th minute when he threaded a through ball onto the path of Deyverson but the forward was dispossessed of the ball in the six yard box.


Etebo was however booked in the 61st minute as he clashed heads with Granada's Yangel Herrera with both players contending for an aerial ball.
The yellow card was his third of the season in La Liga.
Izuchukwu Okosi