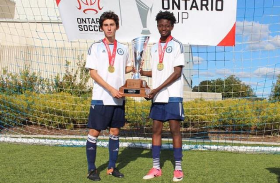 Allnigeriasoccer.com can exclusively report that Chelsea have firmed up their interest in highly-rated Nigerian central defender Abdulmalik Justin Owolabi-Belewu by officially inviting him to train with the club with a view to a transfer.
Born July 3, 2002 in the United Kingdom, Owolabi-Belewu is currently on the books of Toronto FC Academy U19 team, whom he joined in 2018.
Chelsea must move fast to tie up a deal for the left-footed center back as they face competition for his services; he is also wanted by Craig Bellamy's Anderlecht reserve team who have invited him for pre-season training.
The 6ft 2in tall Owolabi-Belewu started out his career as a striker but was converted into a central defender when he moved to Toronto FC.
Prior to joining Toronto FC, he wore the colours of London Youth Whitecaps and was the league's top scorer for three consecutive years 2016, 2017 and 2018.
He was the division's top scorer (grade 9/2017 and grade 10/2018) during his time with Sir Frederick Banting S.S Varsity Team.
The multiple-eligible Owolabi-Belewu has trained with Canada's U15, U16 and U19 national teams in the past and was called up for a Nigeria U17 training camp last year but did not attend.
He has been described as a versatile central defender with good vision, range of passing, physical build and high IQ.
Owolabi-Belewu would be eligible to sign a professional contract if he impresses the Chelsea youth team coaches during his trial period.
Ifeanyi Emmanuel
Copyright ANS