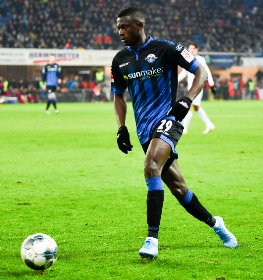 Allnigeriasoccer.com's round-up of Nigerian players that were in action for their respective clubs in the German Bundesliga on Saturday, June 13.


Nigerian players with dual nationalities and have played competitively for the senior national teams of other countries have been omitted.
At the Olympiastadion Berlin (Berlin), Hertha Belin suffered a 4-1 defeat at the hands of Eintracht Frankfurt, with Nigeria target Jordan Torunarigha logging the full shift for the home team.
Krzysztof Piatek opened the scoring for Hertha in the 24th minute but Eintracht Frankfurt were ruthless in the second half, scoring through Bas Dost, Andre Silva (2) and Evan N'Dicka to claim a win.
Elsewhere, Union Berlin claimed a 2-1 road win against Cologne at the RheinEnergieStadion, thanks to goals from Marvin Friedrich and Christian Gentner.
Out-of-favour Super Eagles striker Anthony Ujah came off the bench to face his former side in the 63rd minute, same minute Cologne starter Kingsley Ehizibue was replaced.
Union Berlin's number 20 Suleiman Abdullahi watched proceedings from the bench for the entirety of the game.
At Benteler-Arena, a rampant Werder Bremen side thrashed Paderborn 5-1, with Nigeria international Jamilu Collins going the distance for the home team as expected.
Davy Klaassen (2), Yuya Osako, Maximilian Eggestein and Niclas Fuellkrug with the goals for Werder Bremen while Abdelhamid Sabiri's 66th minute strike proved to be a consolation.
In the evening kickoff between Bayern Munich and Borussia Mönchengladbach at the Allianz Arena, Netherlands U19 international Joshua Zirkzee starts for the champions-in-waiting.
Ifeanyi Emmanuel
Photo Credit : scp07.de
Copyright ANS