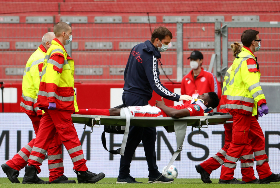 Liverpool-owned striker Taiwo Awoniyi was handed his fourth consecutive start in the ongoing game between Mainz and Augsburg at the OPEL Arena, but could not complete the match after suffering a nasty looking injury, allnigeriasoccer.com reports.
Seventeen minutes into the contest, Awoniyi came close to netting his second German Bundesliga goal with Mainz's first sniff at goal but his header narrowly missed the target.
Following a clash of heads with Augsburg's Nigeria-eligible center back Felix Uduokhai in an aerial battle, Awoniyi looked almost unconscious as he landed awkwardly on his neck.
The former Nigeria U23 international was stretchered off (as pictured) in the 23rd minute after receiving treatment on the pitch.
Bundesliga broadcaster Sky Deutschland informed shortly before halftime that Awoniyi was treated in an ambulance and taken to the hospital.
The 22-year-old has found himself back in favour since the resumption of the Bundesliga, so much so that Mainz are in talks with Liverpool over the possibility of extending his stay beyond the end of the 2019-2020 season.
Ifeanyi Emmanuel
Photo Credit : dw.com/Getty Images
Copyright ANS