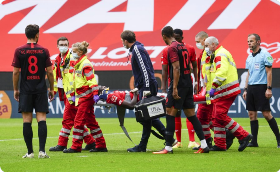 German Bundesliga side Mainz 05 have provided an update on the injury suffered by Liverpool-owned striker Taiwo Awoniyi during Sunday afternoon's 1-0 loss to Augsburg.
The former Nigeria U23 international landed awkwardly on his neck following an aerial battle with Augsburg central defender Felix Uduokhai in the 17th minute.
He was treated on the pitch for about five minutes, then driven by an ambulance to the hospital.
The  preliminary diagnosis from the medics is that Awoniyi suffered a severe concussion but the good news is that the striker is now conscious and did not swallow his tongue.
Providing an update on Awoniyi's condition, Mainz tweeted : "Our striker Taiwo Awoniyi suffered a concussion in his collision with Augsburg's Felix Uduokhai and is spending the night in hospital as a precautionary measure."
Mainz's next game in the Bundesliga comes up against Borussia Dortmund on Wednesday, June 17 and it is all but confirmed that Awoniyi will sit out the game, based on concussion protocol.
Igho Kingsley
Photo Credit : mainz05.de
Copyright ANS