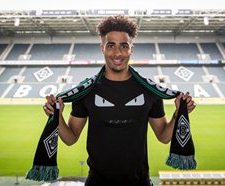 Former Tottenham Hotspur winger Keanan Bennetts made his Bundesliga debut for Borussia Mönchengladbach in their 3-0 rout of Wolfsburg at BORUSSIA-PARK on Tuesday evening, allnigeriasoccer.com reports.
Before today's game, Bennetts had made the matchday squad for two games against FC Schalke 04 in the Bundesliga  and SV Sandhausen in the DFB-Pokal but was a non-playing substitute on both occasions.
With the outcome of the game all but decided, manager Marco Rose brought him on as a replacement for Lars Stindl in the 90th minute.
Borussia Mönchengladbach led 2-0 at the break courtesy of a brace from Jonas Hofmann and a further strike from Lars Stindl in the 65th minute made the scoreline more emphatic.
The 21-year-old Bennetts has made only two appearances for Borussia Mönchengladbach's reserve team in the Regionalliga West due to a hamstring injury but he has now returned to full fitness.
Keanan Bennetts, who is eligible for Nigeria, Germany and England, was in contention to feature for the Flying Eagles at the 2019 FIFA U20 World Cup but wanted to concentrate on club football because he was just returning from a torn muscle fibre injury.
His younger brother, Jayden, represents Watford and made his professional debut against Tranmere Rovers in a third round FA Cup replay five months ago.
Ifeanyi Emmanuel
Photo Credit : borrussia.de
Copyright ANS