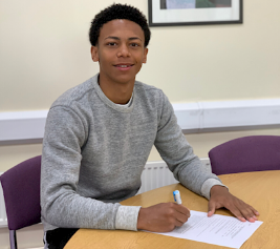 Skillful striker Tyreece Onyeka has ended speculation about his future by inking a new deal with League One newcomers Crewe Alexandra, informs the official website of the Railwaymen.
The 18-year-old has signed his first professional contract with Crewe Alexandra, keeping him at the club until the end of the 2020-2021 season.
He was among the players offered new deals when Crewe Alexandra announced their retained and released list last week and has decided to sign on the dotted line.
In the recently concluded season, Onyeka featured for the Railwaymen youth teams in the  Professional Development League, Cheshire Cup, U18 Professional Development League 2 and FA Youth Cup.
The 2001-born forward was a second-year scholar at Crewe Alexandra during the 2019-2020 campaign.
Another Nigerian teenager in Rio Adebisi has been offered a new contract by Crewe Alexandra but nothing has been formalized yet.
Igho Kingsley
Photo Credit : crewealex.net
Copyright ANS