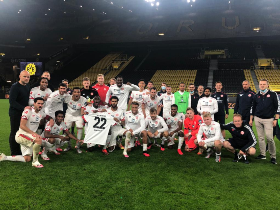 Mainz have dedicated their shock win against perennial Champions League qualifiers Borussia Dortmund to their recuperating striker Taiwo Awoniyi, allnigeriasoccer.com reports.
Two matches to the end of the 2019-2020 season, Die Nullfünfer are on the brink of safety thanks to their 2-0 win at the
Signal Iduna Park, with Jonathan Burkardt and Jean-Philippe Mateta finding the net for the visitors.
Awoniyi was not in the traveling party to Dortmund after suffering a head injury in the penultimate round of matches against Augsrbug which led to his substitution midway through the first half.
Shortly after yesterday's game, the Mainz players and staff gathered for a group photo at the stadium, and one of the players was seen holding up Awoniyi's number 22 jersey.
Mainz posted on Instagram with the accompanying picture, " This win is for Taiwo  🙌🏽😍".
Awoniyi responded : "Yes ❤️❤️❤️❤️🙌🙌🙌🙏🏿🙏🏿🙏🏿".
The former Nigeria U23 international started the previous four matches contested by Mainz prior to the trip to Dortmund.
Liverpool, Awoniyi's parent club, have officially informed that their medical team is in contact with Mainz regarding the striker's injury and will continue to assess him before he is cleared to return to action.
Ifeanyi Emmanuel
Photo Credit : mainz05.de
Copyright ANS