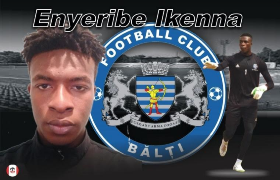 Enyeribe Kelvin Ikenna put pen to paper on a two year deal after the two sides completed the negotiation process.

The development was communicated to the public via the social media handles of the club immediately the exciting, ball playing and reliable shot stopper signed the dotted lines with the Moldova Division 1 club.

He will feature for FC Balti in all their competitions in the next two years as stipulated in the contract.

Football Club Zaria Bălți, commonly known as Zaria Bălți is a Moldovan football club based in Bălți, currently playing in the Divizia "A".

Between 1992 and 2014 the team was known as Olimpia Bălți before a change of ownership necessitated a change in name.

President of Right2Win Football Academy Engineer Kelechi Orji Nnorom expressed happiness and advised the goalkeeper to be of good conduct and also portray the good image of the club at his new abode.

He said "We are sincerely happy for the boy, we keep working hard to ensure our players gets the best in search of greener pastures and it's an evidence that we are doing something right. Kelvin is a good boy and I believe he will be a good ambassador of Right2Win over there and will give us quality representation".

The goalkeeper joined Right2Win Academy from Dosad Football academy, and the Right2Win family extended its appreciation to Reverend father Obinna Dike who was highly instrumental in the development of the player.

On the part of Mr Eddie Iseri Ogbemudia, the principal Officer of Myron Topclass Sport Outfits who facilitated the transfer, he said "I am not surprised Ikenna was able to secure a professional contract in Europe after few days trials, he really shone like a million star during the 3rd edition of Right2Win U19 Scouting Tournament held in Abuja, very soon he will be knocking the doors of the national team with his superlative performance"

Right2win Academy is known as the football talent hub in Nigeria, based in Abia State, South Eastern part Nigeria.