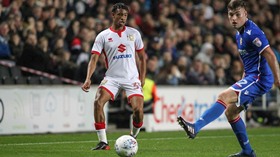 EFL League One club MK Dons have published their retained and released list following the curtailment of the 2019-2020 season.
Among the players retained by the Dons is exciting Nigerian midfielder David Kasumu, who signed a new deal in December 2019, if not his contract would have expired at the end of this month.
Kasumu’s creative and technical attributes have drawn comparisons to retired Nigeria international Mutiu Adepoju.
The 20-year-old played a key role for the Milton Keynes outfit in the recently concluded season, making 29 appearances in all competitions, including fourteen starts in the third-tier, and helped the side avoid the drop.
Since making his professional debut at the age of 16 back in August 2016 in a League Cup clash against Newport County, Kasumu has totaled 35 appearances and has found the net twice - against Blackpool (League One) and AFC Wimbledon (League Cup).
He joined MK Dons aged thirteen and signed his first professional contract two months after his eighteenth birthday.
Kasumu represented Team Nigeria UK at the 2015 African Nations Cup in the UK and was called up to a Nigeria U15 training camp that same year.
Ifeanyi Emmanuel
Photo Credit : mkdons.com
Copyright ANS