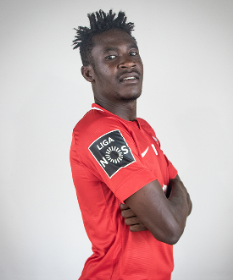 Nigerian left-back Zaidu Sanusi opened his goalscoring account in the Primeira Liga as Santa Clara beat Portuguese super club Benfica in a seven-goal thriller at the Estádio do Sport Lisboa e Benfica on Tuesday evening, allnigeriasoccer.com reports.
Twelve minutes into the second half, Sanusi planted a bullet header past Benfica goalkeeper Vlachodimos from Osama Rashid's brilliant corner into the box to make it 2-1.
In the goal-laden affair, the Santa Clara defender was not at fault for the first two goals scored by Benfica through Rafa Silva and Carlos Vinícius but was partly to blame for their third goal in the 65th minute when he allowed André Almeida to whip in a cross headed into the net by Carlos Vinícius.
Santa Clara's other scorers were Anderson Carvalho, Cryzan and Zé Manuel, while Rafa Silva also got on the scoresheet for the Eagles.
This season, Sanusi has 18 games under his belt in the Portuguese top-flight and was in action for 1,388 minutes before netting his first ever goal in the division.
Prior to his move to Santa Clara in July 2019, he wore the colours of Gil Vicente and Mirandela.
Ifeanyi Emmanuel
Photo Credit : cdsantaclara.com
Copyright ANS