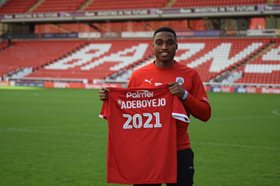 Former Arsenal youth-teamer Victor Adeboyejo has been retained by EFL Championship club Barnsley for the 2020-2021 season.
The Reds confirmed their retained and released list on Wednesday, with the Nigerian striker among the twenty-five U24 players as of 30 June 2020 who have been retained or have a contract offer pending.
Seeking more playing opportunities, Adeboyejo spent the first half of the 2019-2020 season on loan at League One club Bristol Rovers, before joining fourth-tier side Cambridge United in January for the remainder of the season.
He moved to Barnsley in November 2017 and is credited with 31 appearances for the first team, scoring four goals.
Born in Ibadan, he enjoyed loan spells at Royston Town, Hemel Hempstead Town, Heybridge Swifts, Dulwich Hamlet, Soham Town Rangers and Margate during his spell at Leyton Orient.
Apart from Arsenal, Adeboyejo also represented the youth teams of AFC Wimbledon and Charlton Athletic.
The 22-year-old has a contract with Barnsley until the end of next season.
Igho Kingsley
Copyright ANS