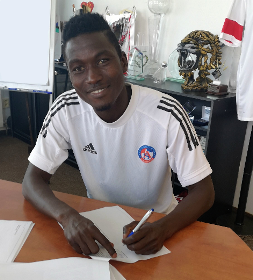 Nigeria U20 international Ahmad Ghali extended his contract with AS Trencin at the beginning of the week, informs the Slovakian Fortuna Liga side on their official website.
The striker initially joined AS Trencin in January 2020 and has made two appearances in the Fortuna Liga - Relegation Group, scoring on his debut in a 4-0 win against Pohronie on June 13.
AS Trencin spokesman Martin Galajda believes Ghali can follow in the footsteps of Super Eagles wingers Moses Simon and Samuel Kalu who starred for AS Trencin before moving to KAA Gent in Belgium.
Galajda told the club's official website : "Given the situation in the world, there was not enough time to test Ghali's potential. Therefore, we agreed to postpone our final decision.
"However, it must be said that his acclimatization went very well, as the last two matches have shown.
"We believe that Moses Simon and Samuel Kalu will have a follower."
A member of the Flying Eagles squad to the 2019 African Games, Ghali scored against Burkina Faso and South Africa during the tournament in Morocco.
Igho Kingsley
Photo Credit : astrencin.sk
Copyright ANS