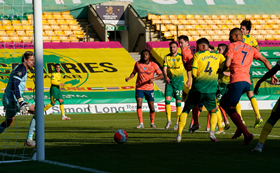 Allnigeriasoccer.com's round-up of Nigerian players who were in action for the respective clubs in the English Premier League on Wednesday, June 24.
At Old Trafford, Manchester United closed the gap on Chelsea to two points following a 3-0 win against Sheffield United.
Former Nigeria international Odion Ighalo is still waiting to make his full Premier League debut for the Red Devils as he was not named in the starting lineup for the sixth consecutive game.
The number 25 came off the bench to replace hat-trick hero Anthony Martial with ten minutes left on the clock.
The France international knocked the ball past the goalkeeper from point-blank range to open the scoring after six minutes, he tapped home to make it 2-0 just before half-time, before bagging his hat-trick with a dinky finish in the 74th minute.
At Carrow Road, a headed goal from Michael Keane in the 55th minute gave Everton all three points in a 1-0 win over bottom team Norwich City.
Super Eagles playmaker Alex Iwobi was in action for 90 minutes in his fourth start in the Premier League under manager Carlo Ancelotti and had a good game especially in the second half.
Republic of Ireland U21 international Adam Idah entered the game as a substitute in the 79th minute, while Toffees youngster Dennis Adeniran was not in the matchday squad.
Let's go to the Molineux Stadium, where Wolverhampton Wanderers entertained Bournemouth. Raul Jimenez's effort on the hour mark proved to be the winning goal.
Former Chelsea and Liverpool starlet Dominic Solanke played the last 24 minutes for the Cherries while Phil Billing was replaced four minutes into the second half.
Ifeanyi Emmanuel
Photo Credit : evertonfc.com
Copyright ANS