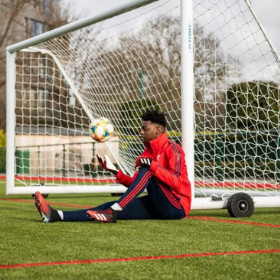 Allnigeriasoccer.com understands that promising Nigeria-eligible goalkeeper Arthur Okonkwo will not make his English Premier League debut when Arsenal face Southampton at the St Mary's Stadium on Thursday evening.
The England U18 international was spotted at London Colney earlier this week, fueling speculation that he was under consideration for the trip to the South Coast.
However, Gunners boss Mikel Arteta did not include him in the traveling squad, which is not surprising considering that he has been inactive at club level for more than a year, with his last game coming against Leicester City in the Premier League 2 on April 26, 2019.
Last summer, Okonwko was on international duty with England U18s and started in wins against Russia and Mexico.
Arsenal are facing a goalkeeping crisis after first choice glovesman Bernd Leno, who has started the last 61 matches contested by the club in the Premier League, suffered a knee injury in the defeat to Brighton & Hove last weekend.
Okonkwo had been on the radar of Arsenal's previous coaches Arsene Wenger and Unai Emery, and was invited to train with the first team while still a schoolboy.
Ifeanyi Emmanuel
Copyright ANS