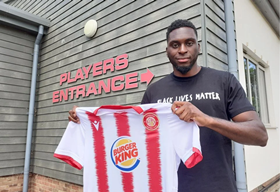 Demoted League Two club Stevenage have announced the capture of another Nigerian striker, less than twenty four hours after confirming the signing of Inih Effiong.
Stevenage's latest recruit ahead of the start of pre-season preparations is Femi Akinwande, a 24-year-old who netted 12 goals combined for both Braintree and Billericay Town over the course of last season.
In his first words as a Stevenage player, Akinwande told the club's official website : "It feels very, very good. I was waiting for a full-time opportunity and when I spoke to the gaffer it was a no-brainer to join.
"He said he has seen my clips and he sent somebody down to watch a few of my games and he was impressed, so I am just very grateful for the opportunity."
Akinwade has three appearances to his name in the Football League, all earned in the colours of Colchester United.
A former Millwall youth-teamer, he has also represented Dartford, Walton Casuals, Leatherhead, Fisher, Maldon & Tiptree, Bishop's Stortford, East Thurrock United and Concord Rangers in the past.
Igho Kingsley
Photo Credit : stevenagefc.com
Copyright ANS