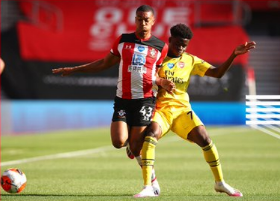 Arsenal got their post-restart hoodoo out of their system with a 2-0 win over Southampton at the St Mary's Stadium on Thursday evening which galvanized their European prospects.

Eddie Nketiah broke the deadlock when he capitalized on a goalkeeping error by Alex McCarthy twenty minutes in, before substitute Joe Willock sealed the win with his first Premier League goal three minutes from time.

Fellow Academy graduate Bukayo Saka showed his versatility once again, impressing at left wing-back over the course of ninety minutes he was in action.

The 18-year-old was defensively solid, especially in his individual duel with Kyle Walker-Peters, and created chances for his teammates when he ventured forward, something which was noted by manager Mikel Arteta in his post-match thoughts.


On Saka, Arteta was quoted as saying by Football. London : "It's in his hands. He has a manager who has total belief in him and teammates who adore him.
"You can put him in different positions and he picks it up really quickly. He could have produced three goals today easily."
Saka has been involved in 13 goals (3 goals, 10 assists) from 36 appearances in all competitions since making his professional debut for Arsenal in November 2018.
Ifeanyi Emmanuel
Photo Credit : southamptonfc.com
Copyright ANS