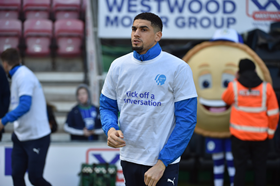 English Premier League side Brighton & Hove have officially announced that Nigeria national-teamer Leon Balogun has completed a permanent transfer to second-tier club Wigan Athletic.
The central defender has secured a transfer to the Latics until the end of the 2019-2020 season, specifically July 21, 2020, the date when they are due to face Fulham in their final game in the Championship.
Balogun found playing opportunities limited at the Seagulls, making 12 appearances across two seasons, and scoring once - a brilliant volley in a 3-1 win vs Crystal Palace in December 2018.
"Leon has always been extremely professional and good to work with during my time at the club, but he was finding it hard to get the game time he would have liked," Brighton boss Graham Potter told the club's official website.

"So the loan move to Wigan seemed to be a good move for everyone involved, and he has made a really positive impact there.

"We would like to thank him for his contribution over the last couple of years and we wish him all the best for the next chapter of his career."
Balogun has played six matches for Wigan Athletic, logging 455 minutes, but was not in the squad that beat Huddersfield Town 2-0 last weekend.
Igho Kingsley
Photo Credit : wiganathletic.com
Copyright ANS