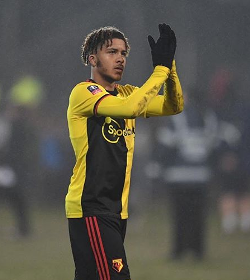 English Premier League side Watford have confirmed through their official website that former Flying Eagles invitee Jayden Bennetts will leave the club upon the expiration of his contract this month.
Joining the attacking midfielder out of the Hornets exit door is another talented player of Nigerian descent in Jamal Balogun, who captained the U23 team for the 2019-2020 season.
As exclusively reported by allnigeriasoccer.com a month ago, Watford wanted to trigger the one-year option on Bennetts but he asked for them not to and they accepted his request, paving the way for him to join a new club in the summer transfer window.
The 18-year-old made his professional made against Tranmere Rovers in the FA Cup in January 2020, a game in which Balogun was a non-playing substitute.
While Bennetts was on the books of Watford for roughly ten years, defender Balogun joined from Reading in 2019.
Meanwhile, Watford have offered exciting winger Joseph Hungbo a one-year extension to his contract.
The 20-year-old, who joined from Crystal Palace last summer, was one of the standout players for the Hornets U23 squad this term and made his first team debut vs Tranmere Rovers.
Finally, Nigerian-born midfielder Emmanuel Adebiyi will depart at the end of his scholarship this summer.
Ifeanyi Emmanuel
Copyright ANS