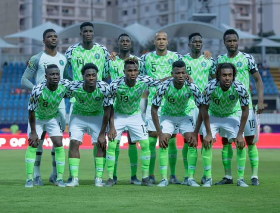 Super Eagles coach Gernot Rohr has explained that he doesn't utilize Nigeria Professional Football League players for national team matches because they are not on the same level as their foreign-based counterparts.
With the exception of Heartland goalkeeper Ikechukwu Ezenwa, local-based players hardly get a look-in when the German names his rosters for Super Eagles matches.
The Nigeria Football Federation and Minister of Sports have questioned the decision of Rohr not to invite NPFL stars and it was stipulated in the German's new contract that he has to live in Nigeria so he can monitor players in the domestic championship with a view to a call-up to the Super Eagles.
Rohr has argued that the few good players in the local league finally end up in the European Leagues.
"Because they are not good enough and because I have better ones. There are so many good players in Europe," Rohr said to Mannheimer Morgen.
"I have invited more than 20 local players since 2016. If they are good, sooner or later they'll all end up in Europe."
Rohr will be 69 years old when he comes off contract with the Nigerian Federation in December 2022, and he's hoping to emulate French coaches Guy Roux and Claude Leroy.
"There is another one, namely Claude Leroy. He is in charge of the Togo national team and is 72.
"I will keep going as long as I feel fit, healthy and young enough. My enthusiasm drives me," Rohr concluded.