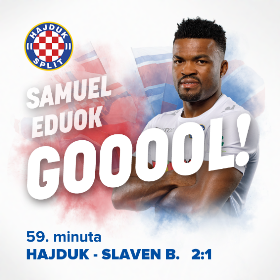 Allnigeriasoccer.com's round-up of the Nigerian players who were on target for their respective clubs in league matches across Europe on Friday, June 26.
In Croatia, out-of-favour Super Eagles striker Emem Eduok bagged his tenth league goal of the season to help Hajduk Split register a 2-1 win against Slaven Koprivnica at Stadion Poljud (Split).
With 59 minutes played, Hadjuk Split reestablishment their one-goal lead when the former Rivers United star nodded the ball into the net.
Eduok ended a five-game goal drought with his match-winning strike today which saw Hadjuk Split return to second position in the HNL table with 54 points.
In the Danish First Division, Vendsyssel FF were held to a 2-2 draw by Kolding IF at the Nord Energi Arena (Hjørring), with Emmanuel Ogude getting on the scoresheet for the home team four minutes after the restart.
Twice Vendsyssel FF, who are fourth in the standings, held one-goal leads but the opponents replied in each half.
The 26-year-old Ogude has tallied seven goals in all competitions this term, including a hat-trick against Kjellerup IF in the Sydbank Pokalen back in August.
Ifeanyi Emmanuel
Photo Credit : hajduk.hr
Copyright ANS