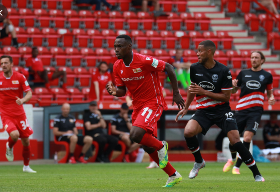 Nigeria international Anthony Ujah ended his goal drought of going fifteen matches without a goal after getting on the scoresheet for Union Berlin in their 3-0 rout of Fortuna Dusseldorf on the final day of the 2019-2020 season on Saturday afternoon, allnigeriasoccer.com reports.
Prior to today's contest at the Stadion An der Alten Försterei (Berlin), the former Lillestrom goal machine last found the net against Borussia Mönchengladbach on November 23, 2019.
The striker did not score in thirteen straight Bundesliga matches he was involved in and fired blanks in DFB Pokal fixtures against SC Vert and Bayer Leverkusen this year.
On 26 minutes, Union Berlin took the lead and Ujah was credited with the goal as he had the final touch after a volley from Joshua Mees.
He then turned provider for Christian Gentner to give Union Berlin a two-goal advantage at minute 54, before Suleiman Abdullahi, who replaced Ujah just past the hour mark, made the scoreline more emphatic when he scored the third goal.
Abdullahi's first-ever Bundesliga goal came in his sixth appearance and he was in action for 152 minutes in total.
Ifeanyi Emmanuel
Photo Credit : fc-union-berlin.de
Copyright ANS