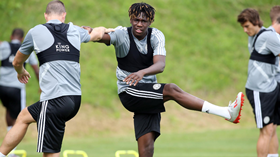 It has come to light that promising left-back Calvin Bassey turned down an opportunity to extend his stay at Leicester City before he agreed terms with Scottish Premiership giants Glasgow Rangers, allnigeriasoccer.com reports.
The 20-year-old will officially become a player of Rangers when he comes off contract with The Foxes on June 30,  having already agreed a four-year deal.
Bassey was one of the six Leicester City players offered new contracts for the 2020-2021 season, according to the retained list the club submitted to the English Premier League.
Rangers boss Steven Gerrard noted that several clubs were interested in signing the multiple-eligible youngster, who qualifies to represent Italy, Nigeria and England, before he chose The Light Blues.
"There was a lot of clubs interested in Calvin and for us it’s pleasing to secure the services of another young talent," Gerrard told the club's official website earlier this month.

"He’s a strong and dynamic athlete who is very much the modern day full back. He will develop further and we are excited to have made another strong addition to our group."
Bassey joins Super Eagles midfielder Joe Aribo, ex-Golden Eaglets invitee Malcolm Ebiowei and talented striker Dapo Mebude at Rangers.
Kelechi Iheanacho, Wilfred Ndidi, Layton Ndukwu, Daniel Obi and Chituru Odunze have been retained by Leicester City for the 2020-2021 campaign.
Ifeanyi Emmanuel
Photo Credit : lcfc.com
Copyright ANS