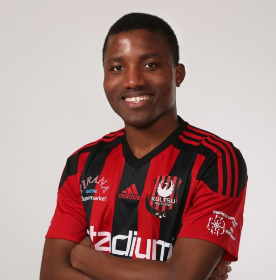 Allnigeriasoccer.com's round-up of the Nigerian players on target in League matches across Europe and Asia on Sunday, June 28.
In Japan, Nigeria international Peter Utaka opened his account for Kyoto Sanga, whom he joined in January 2020, as they claimed a 2-0 win against Jubilo Iwata in a J League 2 match.
Twenty-eight minutes into the game, the Kyoto Sanga number 9 scored with a left-footed shot inside the box and doubled the advantage with another poacher's finish in the 47th minute.
The best individual performance today wasn't from Utaka but a certain Abah Samson Akoh, who bagged a hat-trick to help Kultsu register a 4-3 win vs PK Keski-Uusimaa in the Finnish Kakkonen.
The 21-year-old opened the scoring after nine minutes, got his second of the game in the 70th minute and grabbed his hat-trick seven minutes from time. Compatriot Alexander Odeh was Kultsu's other scorer, in the 31st minute.
Last season, Akoh was the top scorer in the third division with 30 goals, while Odeh found the net 13 times.
In the Norwegian top-flight, Molde maintained their 100 percent record in the new campaign by beating Stabaek 4-1 at the Aker Stadium.
Back from suspension and injury, Leke James made it two goals in as many games when he gave Molde a 3-0 lead just before the hour mark, before Ohi Omoijuanfo scored from the spot in the 90th minute.
Finally, in the Albanian Superliga, former Liverpool striker Michael Ngoo netted a brace as KF Tirana, coached by ex-Nigeria international goalkeeper Ndubuisi Egbo, came from one goal down to beat Skënderbeu Korce 2-1 at  Stadiumi Skenderbeu (Korce).
Ngoo equalised in the 71st minute and netted the winner six minutes later.
Ifeanyi Emmanuel
Photo Credit : kultsfc.fi
Copyright ANS