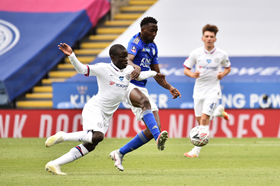 Manchester United legend Rio Ferdinand reckons that Wilfred Ndidi was chiefly at fault for the goal conceded by Leicester City in their 1-0 loss to Chelsea in the FA Cup this evening.
Despite checking his shoulder twice for any possible danger, the Nigeria international did not pick Ross Barkley up in the build-up to the goal, allowing the England international to make a run inside the box before volleying home in the 63rd minute.
Ferdinand acknowledged that Ndidi has been brilliant since his move to the King Power Stadium but should have prevented the goal.
In quotes carried by Leicestershire Live citing BT Sport, Ferdinand stated : "The gap between the centre-backs starts to develop. When that happens, when that big gap comes, the big job is for Ndidi, who has had great reviews for how he’s played over the years, and rightly so.

"Once you see the gap between the centre-backs when the ball’s wide, his job is to drop in, drop in here and be that guard in there. If you keep your eye on Ndidi here, and look how many times he looks over his shoulder to see where Barkley is.

"One look, two looks - when he looks there - he has to drop in there and cover the run from Barkley. He knows he can get in behind Ndidi because he’s not looking.

"Jonny Evans, one of my old team-mates, sees this but he’s marking his man - Tammy Abraham - once he sees it he’ll come over to try and cover. But once this happens at this level, it’s too quick, the quality is too good, it’s a great cross and the timing eliminates defenders out of it.

"Barkley sees the space, darts into it, great ball, great finish. Bad defending from Ndidi and the midfield."
Today's game against Chelsea was Ndidi's eighth appearance in the FA Cup since moving to England in January 2017.
Igho Kingsley
Photo Credit : chelseafc.com
Copyright ANS