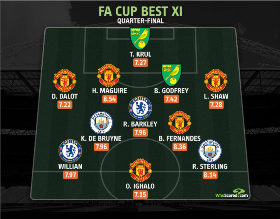 Of the four Nigeria-eligible players who tasted action in the quarterfinals of the FA Cup, only Odion Ighalo has been selected in the FA Cup Team of the Quarter-Finals by Whoscored.
Both Arsenal wonderkid Bukayo Saka and Leicester City midfielder Wilfred Ndidi went the distance against Sheffield United and Chelsea respectively, while Adam Idah played the last two minutes for Norwich City.
Joining Ighalo in the Team of the quarter-finals are four of his teammates at Manchester United, namely fullbacks Diogo Dalot and Luke Shaw, center back Harry Maguire and midfielder Bruno Fernandes.
The Shanghai Shenhua loanee showed his poacher's instinct with an acrobatic effort to break the deadlock five minutes into the second half against the Canaries and was also involved in the build-up to the match-winning goal.
Ighalo was awarded a rating of 7.35 for his efforts against Norwich City.
He attempted 2 shots one of which was on target, won 2 aerial duels, won two fouls for his team, and completed 68.4 percent of his passes.
Ighalo and Ross Barkley are the top scorers left in the FA Cup with three goals each after they both got on the scoresheet last weekend.
Ifeanyi Emmanuel
Copyright ANS