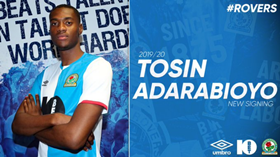 Manchester City-owned central defender Tosin Adarabioyo has extended his loan deal with Blackburn Rovers, the Championship club informed via their official website on Monday, June 29.
The former England youth international will now remain at Rovers until the end of the 2019-2020 season and will be eligible to represent the club if they qualify for the play-offs.
Adarabioyo's previous deal with the Lancashire club was supposed to run out on June 30.
The 22-year-old is an influential player for Blackburn Rovers, making 28 starts since his arrival at the club and has found the net three times from his defensive position.
Before the start of this campaign, Adarabioyo's chances of breaking into City's starting lineup were slim, with John Stones, Aymeric Laporte, Fernandinho and Nicolás Otamendi ahead of him in the pecking order of center backs.
He is in line to make his 75th career appearance as a professional in tomorrow's Championship clash between Barnsley and Blackburn Rovers at Oakwell.
The giant defender spent the whole of last season on loan at West Brom.
Igho Kingsley
Photo Credit : rovers.co.uk
Copyright ANS