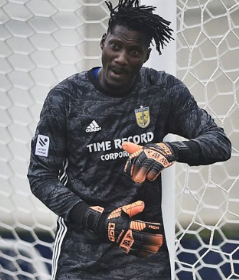 Allnigeriasoccer.com's round-up of the Nigerian players on target for their respective European clubs in league matches across Europe on Monday, June 29.
There are five goals to report, scored by three players in the Latvian Virsliga on matchday four and a Super Eagles midfielder.
Chinonso Offor Nnamdi is the Player of the Day after notching a brace for BFC Daugavpils in their entertaining 4-2 win against FS Metta/LU at the Stadions Celtnieks (Daugavpils).
Born May 27, 2000, Offor scored his second league goal in four days when he broke the deadlock at minute 15, before putting his side 4-1 ahead in the 47th minute.
At the Vidzemes Olimpiskais centrs, Valmiera ran out 2-0 winners against Tukums, with the 2000-born striker Toluwalase Emmanuel Arokodare netting his second goal in as many games four minutes after the restart.
In the second half of last season, he scored 7 goals in 16 appearances in the division.
2013 U17 World Cup-winning goalkeeper Dele Alampasu has made his competitive debut for FK Ventspils, going the distance as they claimed an impressive 3-1 road win at Spartaks Jūrmala.
Another 2000-born attacker Kazeem Aderounmu opened his account for the season when he tapped the ball in from close range after a goal-line clearance by Spartaks Jūrmala's Nigerian defensive midfielder Saminu Abdullahi in the fourth minute of stoppage time.
Finally, Nigeria national-teamer Joel Obi netted his first of the season as Chievo Verona beat Frosinone 2-0 at Stadio Marcantonio Bentegodi.
The former Inter Milan star finished at the second time of asking after his initial shot was blocked in the 54th minute.
Ifeanyi Emmanuel
Copyright ANS