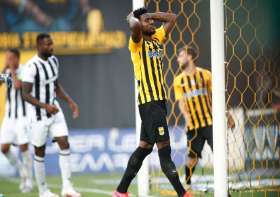 Former West Brom striker Brown Ideye has ended his association with Greek Super League club Aris Thessaloníki, allnigeriasoccer.com reports.
The 2013 Africa Cup of Nations winner officially comes off contract with the Yellow-Blacks on June 30 and has opted not to extend his stay despite the club offering him an extension until the end of the 2019-2020 season.
Ideye's last two appearances in an Aris shirt ended on a sour note as they were beaten 4-3 on aggregate in the semifinals of the Greek Football Cup, before losing 2-0 to PAOK in the Super League this past weekend.
The 31-year-old joined Aris in July 2019 and went on to make 31 appearances for the club in all competitions and ended the season with a double-digit goal tally (10) - which he has not managed since the 2016-2017 season whilst at Olympiakos.
The attacker will not be available for selection when Aris tackle Panathinaikos, AEK Athens and Olympiakos in their final three league games of the season.
Dynamo Kiev, Neuchâtel Xamax, Sochaux and Malaga are the other clubs Ideye previously represented in Europe.
Ifeanyi Emmanuel
Copyright ANS
All rights reserved. This material, and other digital content on this website, may not be reproduced, published, rewritten or redistributed in whole or in part without prior express written permission from allnigeriasoccer.com