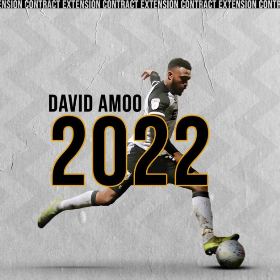 Former Liverpool winger of Nigerian descent David Amoo is now tied to EFL League Two club Port Vale until June 30, 2022 after signing a two-year contract extension.
The 29-year-old has recorded 32 appearances since he joined the Valiants in July 2019, scoring four goals.
He played for Preston North End, Tranmere Rovers, Carlisle United, Partick Thistle and Cambridge United , and had loan spells at MK Dons, Hull City and Bury whilst at Liverpool, before joining Port Vale.
"David has become a key member of John Askey’s squad and a favourite with the fans, with a great sound you get from the supporters when David scores a goal," Chief Executive Colin Garlick told Port Vale's official webpage.

"He has scored some very important goals in his first season with us and has also had some key assists as well as playing an important role in the success of the club off the field."
Amoo made his professional debut for Liverpool in a Europa League qualifying match against FK Rabotnicki in July 2010.
Igho Kingsley
Photo Credit : port-vale.co.uk