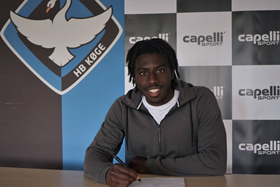 Danish First Division club HB Koge have extended the contract of Nigerian winger Jubril Adedeji, the official website of The Swans informed on Wednesday, July 1.
A product of the Watford Academy, Adedeji joined the Herfølge-based side in November 2018 following his release by the Hornets and has gone on to make 33 appearances, netting four goals and has five assists to his name.
The pacy dribbler has signed a two-and-a-half-year contract with HB Koge.
After the deal was confirmed, Adedeji stated : "I have been delighted to be in HB Køge and it is wonderful to be allowed to continue the journey in the club.
"Both the club and I have great expectations for the future and I am sure we will live up to it all over the next few years."
Adedeji was promoted to the first team of HB Koge two months after he joined the club.
Igho Kingsley
Photo Credit : hbkoge.dk
Copyright ANS