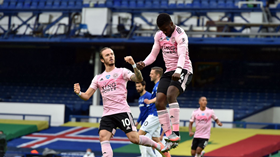 Leicester City are still searching for their first win since the restart following their 2-1 loss to Everton at Goodison Park on Wednesday evening.
Richarlison gave the Toffees an early lead in the 10th minute and six minutes later Gylfi Sigurdsson scored through a spot-kick, awarded after referee David Coote's lengthy consultation with the video assistant referee.
On as a substitute at half-time, Kelechi Iheanacho halved the deficit following a goalmouth scramble at minute 51, his ninth goal in all competitions this season.
Former Liverpool striker Michael Owen, on punditry duties with Premier League Productions, believes that the referee made the right call to award a penalty to Everton as it was clear Ndidi handled the ball in the area.
He said : "The ball has traveled 30 odd meters in the air, you can see it the whole way and it hits Ndidi's arm first.

"Without even seeing the pictures, if someone said to you there is a ball crossed into the box and it traveled 30 yards in the air and the first thing it hit was someone's arm, that was above everybody's head, you'll say I don't even need to see it, it is a penalty. It has to be a penalty."
Despite the loss, the Foxes remain third in the provisional standings with 55 points ahead of the next Premier League match against Crystal Palace, while Alex Iwobi's Everton are 11th, but two points behind Arsenal who are seventh.
Ifeanyi Emmanuel
Photo Credit : lcfc.com
Copyright ANS