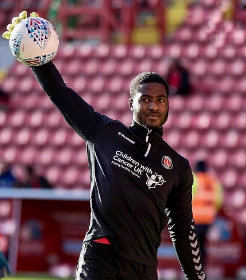 English Championship side Charlton Athletic have taken up a one-year option on talented Nigerian goalkeeper Joseph Osaghae, the Addicks informed through their official website on Thursday morning.
The 19-year-old glovesman is now contracted to Charlton Athletic until the end of the 2020-2021 season.
Osaghae spent a portion of the 2019-2020 season on loan at Isthmian League Premier Division side Hornchurch FC.
He was a member of the Charlton Athletic squad that won the U18 Professional Development League in the 2017-2018 season prior to his promotion to the U23 squad.
A graduate of Lambeth Tigers, Osaghae was first called up to Charlton's first-team for a Checkatrade Trophy game against Swansea City in November 2018 but was a non-playing substitute.
Meanwhile, Nigerian striker Kareem Isiaka has been released along with creative midfielder Abraham Odoh following the expiration of their contracts.
The two youngsters were members of Charlton Athletic U23 team in the curtailed academy season.
Ifeanyi Emmanuel
Copyright ANS