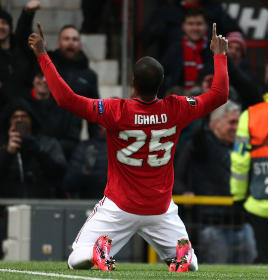 Former Nigeria international Odion Ighalo is in the running to win Manchester United's Goal of the Month for June 2020.
The Shanghai Shenhua-owned striker has been nominated for the accolade along with Anthony Martial, Harry Maguire, Bruno Fernandes and Mason Greenwood, informs United on their official website.
Martial was triple nominated for his goals against Sheffield United, while Ighalo's acrobatic effort vs Norwich City also made the shortlist.
Six minutes into the second half at Carrow Road, the Manchester United number 25 broke the deadlock when he fired past goalkeeper Tim Krul, equaling a 95-year-old club record in the process as the second player to score in his first four competitive starts.
Speaking on the goal vs Norwich, Ighalo stated : "There was nothing I could do, I can’t control the ball there and can’t do anything but just hit with my sidefoot.
"I did and, luckily, it went in. It was too close for the goalkeeper to do anything. As the ball went in, I was very happy but I watched the linesman, who did not raise his flag.
"When I saw it after the game, I even had two guys behind me so I was not offside."
Ighalo, who has accumulated 12 appearances in a Manchester United shirt, won the Goal of the Month award for March 2020 for his effort against LASK in the Europa League.
Igho Kingsley
Copyright ANS