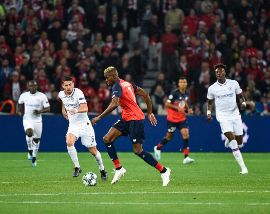 According to celebrated transfer market expert Gianluca Di Marzio, Napoli have received positive signals in their bid to sign Nigerian striker Victor Osimhen, who is being targeted by English Premier League clubs.
The best African player in the Ligue 1 has flown back to France after holding talks with the Napoli hierarchy over a transfer this summer.
Though no agreement has been reached with the striker yet, The Blues are confident of getting the deal over the line because of their relationship with Lille.
Two things have to be sorted out before Osimhen can agree personal terms with Napoli; one has to do with his wages and the other concerns his image rights.
If the Super Eagle manages to agree terms, then Napoli Sporting Director would resume talks with Lille.
Napoli were one of the Italian clubs interested in signing Osimhen after he won the Golden Boot award at the 2015 FIFA U17 World Cup but missed out on his signature to Wolfsburg.
Including strikes against Chelsea and Valencia in the Champions League, the 21-year-old tallied 18 goals in all competitions over the course of the 2019-2020 season.
Ifeanyi Emmanuel
Photo Credit : losc.fr
Copyright ANS