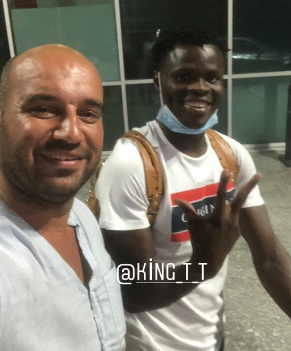 Allnigeriasoccer.com has been told that Taye Taiwo's proposed move to Cypriot First Division team Doxa Katokopias is still alive, following the fullback's arrival in Cyprus last night.
The three-time Africa Cup of Nations veteran was spotted in Larcana alongside his intermediary Tekin Birinci.
Prior to Taiwo's trip to Cyprus, he had signed a one-year preliminary contract that would see him remain at Doxa Katokopias for the entirety of the 2020-2021 season.
The defender and his agent are scheduled to hold talks with Doxa Katokopias President this morning, before his medical and unveiling.
Taiwo has been representing European clubs since 2005, with spells in Marseille, AC Milan, Dynamo Kiev, Queens Park Rangers, Bursaspor, HJK Helsinki, Lausanne, AFC Eskilstuna and RoPS.
The 35-year-old was a member of the Super Eagles squad to the 2006, 2008 and 2010 Africa Cup of Nations.
Ifeanyi Emmanuel
Copyright ANS