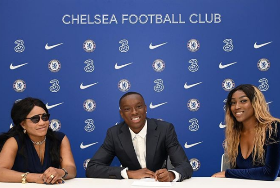 Nigerian fullback Derrick Abu has expressed his happiness after signing a new deal with Premier League giants Chelsea, allnigeriasoccer.com reports.
On Thursday, Chelsea announced their new intake of Academy scholars for the 2020-2021 season, with Abu and two other promising Nigerian teenagers - goalkeepers Prince Adegoke and Kelechi Chibueze - making the cut.
The defender joined The Blues at U11 level after he was spotted by a Chelsea scout playing for local club Coezer FC at a tournament in Spain.
Abu models his game after Real Madrid's Marcelo, Liverpool's Trent Alexander-Arnold and former Barcelona star Dani Alves.
He was accompanied to the signing ceremony held at Cobham earlier this week by his mother and sister.
Writing on Instagram, Abu said : "Happy to have signed my first contract for @chelseafc 🔵📝 #cfc"
The 2003-born Abu has been capped by England at U17 level but is eligible to represent Nigeria without applying for a change of nationality.
Ifeanyi Emmanuel
Copyright ANS