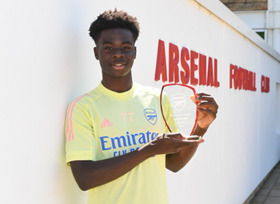 Hale End Academy product Bukayo Saka has been nominated for Arsenal's Player of the Month for June, informs the Gunners on their official website.
The England U19 international of Nigerian parentage has been shortlisted for the monthly accolade and faces competition from Ivorian winger Nicolas Pepe, Scottish fullback Kieran Tierney and Switzerland captain Granit Xhaka.
Last month, the impressive Saka started all the four matches contested by Mikel Arteta's team - against Manchester City, Brighton & Hove and Southampton in the Premier League, and Sheffield United in the FA Cup.
The 18-year-old logged the full ninety in those games with the exception of the 2-1 loss to the Seagulls, a game in which he bagged an assist.
The highly-rated teenager will be hoping to make it two in a row after winning the award for March 2020.
Saka ended speculation about his future at Arsenal this week by putting pen to paper on a new long-term contract.
Igho Kingsley
Photo Credit : instagram.com/bukayosaka87
Copyright ANS