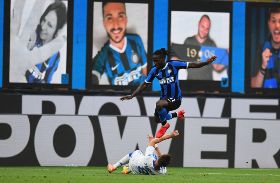 Former Nigeria international Victor Moses faces another spell on the sidelines after suffering an injury in Inter Milan's 6-0 rout of Brescia on Wednesday evening, allnigeriasoccer.com reports.
The Chelsea loanee put in an eye-catching performance against The Biancazzurri, notching a secondary assist and won a penalty converted by Alexis Sanchez in the 20th minute.
Moses was among four players nominated for Inter's Man of the Match, the others being Alexis Sanchez, Ashley Young and Roberto Gagliardini, and came second behind the Chilean.
Two days after the game week 29 clash at the Stadio Giuseppe Meazza (Milano), The Nerazzurri officially informed via a press release that their number 11 was examined this morning at the Humanitas Research Hospital in Rozzano and tests showed that he is suffering from muscle fatigue in his left thigh flexors.
Though the injury is not serious, he is now rated as doubtful for Inter Milan's home match vs Bologna on Sunday plus the trip to Hellas Verona next Thursday, July 9.
Moses had injury problems in the first half of the 2019-2020 season whilst on loan at Fenerbahce, limiting his appearances to just seven games and sat out the Serie A match vs Juventus in March due to a thigh injury.
Igho Kingsley
Photo Credit : inter.it
Copyright ANS