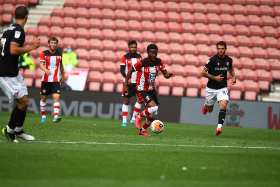 Speaking at a press conference ahead of Southampton's Premier League meeting with deposed champions Manchester City, manager Ralph Hasenhuttl had kind words to say about attack-minded Nigerian starlet Nathan Tella, labeling him an 'interesting striker'.
The former Arsenal schoolboy is not in contention to make his home debut against the Citizens due to fitness issues, and this could be the first time he has not been included in a matchday squad since the season restarted last month.
Tella, this week, committed his long-term future to the Saints by signing a new deal, keeping him at the St Mary's Stadium until the end of the 2022-2023 season.
"He is one of the young guys, the young lads, that we want to develop," Hasenhuttl said on Tella.

"When he shows the character he showed so far, he’s open-minded, wants to learn, invests a lot on the pitch, he can be quite an interesting striker because he can play the striker or the number 10.

"He’s good on the ball, he has good solutions with the ball and, yeah, he is one of the young guys who want to push in the future."
Tella joined Southampton in 2017 after he was not offered a scholarship by Arsenal, where he spent a decade.
Igho Kingsley
Photo Credit : southamptonfc.com
Copyright ANS